Demand for indigenous Australian ingredients is increasing with restaurant-led trends. What role can restaurants play in shaping the ways this demand is met? On April 16, 2018, we gathered for a conversation about collaborations between chefs, farmers and indigenous communities that contribute to a more sustainable and just future.

The goal of our panel discussion was to encourage the audience to think more deeply about what’s missing from Australian culinary culture. We hope to see food businesses supporting an emerging bushfood industry that seeks not to exploit and appropriate lands and people, but rather sets an example through business models that respect and advocate indigenous cultures, practices and communities. 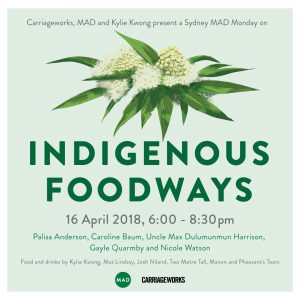 Palisa Anderson is a second generation restaurateur of Chat Thai, Boon Cafe/Jarern Chai Asian Grocers, Assamm and Samorson and a first generation farmer of Boon Luck Farm. She grew up in the kitchen and running the floor of restaurants. After studying a B.A. in International Studies and Sports Biomechanics and working in those fields in Hong Kong, London, New York and Tokyo, she decided to return home to help with the family business as feeding people healthy food is her first passion. She lives between her restaurants in Sydney and farm in Byron Bay, raising her kids, chickens and organic produce in both places.

Gayle Quarmby started the Outback Pride Project together with her husband Mike Quarmby in Reedy Creek, South Australia in 2001. Their aim was to provide opportunities for remote Aboriginal communities to access an industry where their traditional knowledge would be valued. Gayle’s family involvement with traditional communities goes back to 1932, when her father Rex Battarbee travelled to the central Australian outback settlement of Hermannsburg, southwest of Alice Springs. Today, the group of Aboriginal communities that form the Outback Pride network represent the largest bushfood growing organisation in Australia.

Elder Uncle Max Dulumunmun Harrison is an initiated Yuin man and the knowledge holder and teacher of the guides at NNCA. His teachings have been passed down to him by five masters of Aboriginal Lore, and he is a widely respected elder who has been on the National Board of Elders. He is a teacher at the University of Wollongong and has released several books on Aboriginal culture including “My People’s Dreaming”.

Nicole Watson was appointed to the University of Sydney Law School in 2016. She has published a large body of work in relation to legal issues that affect Indigenous communities. Nicole is a former editor of the Indigenous Law Bulletin, and a former columnist with the National Indigenous Times. Nicole is passionate about Indigenous literature and published her first novel in 2011.

Caroline Baum is an Australian journalist, author and broadcaster with a focus on books, food, the arts and aspects of contemporary life. She was the founding editor of Good Reading magazine, long-term presenter of the ABCTV book program Between the Lines, an executive producer with ABC Radio National, and Editorial Director of Booktopia. Caroline has also written books and researched and produced a number of programs for radio and TV, including The World on a Plate and Only: A Singular Memoir. 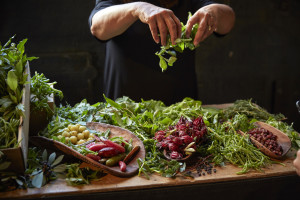 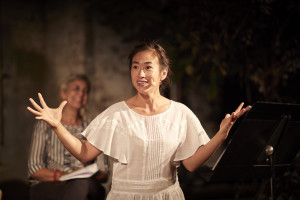 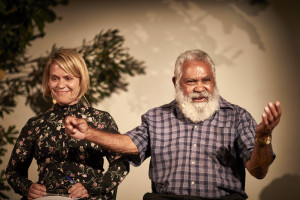