Chido Govera is changing the way we think about food, empowerment, and collaboration. Almost four years ago Zimbabwean campaigner, educator, activist, and farmer Chido Govera came to Copenhagen to speak at MAD 2: “What Gives me the Appetite to be the Person that I am.” Her tireless execution of her vision for a more hopeful, more empowered world for girls and women through food spurred MAD to collaborate with her to take her message to a larger audience (she spoke with us at The World Bank in April, 2015) and find new ways to turn innovation into action that enables people to help themselves.

Chido’s life’s work is educating disadvantaged orphans, women, and communities in her native Zimbabwe so they can lift themselves out of poverty through agriculture. As an 11-year old orphan, she herself learned how to cultivate mushrooms on unused land using agricultural waste, and now she’s passing on what she learned to future generations.

For the past few months, we’ve been working with her to expand and translate the knowledge we’ve been developing at the MAD Lab into a new set of skills that smallholder farmers can use to build a better meal for themselves and for their communities, through growing, foraging, and fermenting. Koji-making class at The Future of Hope in Harare, Zimbabwe

Now, at age 29, Chido has been teaching fungiculture (mushroom cultivation) techniques for over a decade. Many edible mushrooms are saprophytic—meaning they live on and eat dead things, usually dead plant material. In many cases, this means it’s therefore possible to grow mushrooms on substrates that stretch the imagination as fertile materials for supporting life—straw, cardboard, coffee grounds, sawdust, grain husks. Since mushrooms prefer dark, damp spaces, cultivating them doesn’t take up valuable and in-demand agricultural land. If you’re a young girl who no one is supporting (and about 10% of Zimbabwe’s population, almost 1.5 million people, are orphans), it’s something you can do to earn some money (and thus a measure of independence) with waste no one wants in spaces no one is using.

It’s easy to celebrate Chido as an inspiration, based on what she overcame as a child: extreme poverty, abuse by family members, supporting her younger brother and grandmother from the age of seven and narrowly avoiding child marriage (you can watch her MAD talk here to find out more about her life). But even a small amount of time spent with Chido makes it obvious that it is not her past, but her vision for the future that makes her truly special. Inoculating oyster mushrooms on cotton seed waste at the Future of Hope in Harare, Zimbabwe

Since 2012, she has gone from teaching communities in Zimbabwe how to grow mushrooms to taking her message global, piloting an entire sustainable food production and education system. Her farm in Harare is on the land of an orphanage—Chido has become foster mother to the eight teenage girls that live there, and taken it from a charitable institution to a testing ground for new ideas about food and empowerment. There is a full mushroom production space with plenty of room for expansion, where oyster mushrooms grow on cotton seed waste. When the cotton seed-mushroom blocks have been exhausted, they become fertilizer for her onsite organic farm growing leafy greens, herbs, pumpkins, tomatoes, squashes, and wild food plants. A flock of hens, many of them particularly diverse hybrids bred by Chido’s collaborator, the Belgian conceptual artist and chicken expert Koen Vanmechelen, lay eggs that are both eaten by those on the farm and sold elsewhere. The people on the farm—Chido, her girls (who range in age from 11 to 16), the adults who help care for them and manage the land, and increasingly, the local schoolchildren in the neighborhood—all work together to care for each part of it, and aren’t at anyone’s mercy when it comes to feeding and supporting themselves.

Diversifying to minimize risk is hardly a new concept, but a high self-sufficiency, polycultural system isn’t one that’s widely promoted or taught to farmers in the developing world, with many international macroeconomic policies focusing on incentivizing export-based mono-cropping of commodities like corn or cotton over enabling local food security and sovereignty. Growing and cultivating a wider range of plants and animals means that each farm or community is less tied to market fluctuations, and the flexibility of the system—the chickens will eat pretty much any crop that is selling for too low a price, mushrooms can be sold fresh or further processed by drying or other methods to retain their value despite changes in demand—provides both an economic as well as a kind of psychological independence.

This year, a group from MAD and noma—myself along with our head of R&D, two chefs de partie, and our anthropologist and filmmaker—began working more closely with Chido, our initial conversations about fundraising and awareness-building developing into knowledge-sharing about the foods and techniques she teaches, and the fermentation processes and cooking styles we work on here. One “a-ha” moment was the millet, cowpea, and spent grain misos I made for our World Bank event so that policymakers could taste the transformative and flavor-creating action of fermentation on underutilized and waste ingredients. “You can do this with millet?”, Chido asked me afterwards, “this is what we grow!”. After visiting us again in Copenhagen and getting a more exhaustive tasting of our misos, shoyus, garums, mushroom pastes, vinegars, and kombuchas, many of them made from waste ingredients, Chido invited us to visit. We made two trips to Harare from Copenhagen to taste and experiment with the local grains, legumes, mushrooms, fruits, and vegetables of Zimbabwe, learn traditional cooking methods, and share the work we’ve been doing in our lab. Zimbabwe has a strong traditional culture of vegetable, legume, and grain cultivation, with varieties of millet and sorghum (and, increasingly, corn) taking center stage in the everyday meal. We visited collectives who are working to preserve the traditional crops, cooking techniques, and meals of the Shona ethnic group, who taught us techniques for working with grains, claypot cooking, and foraging termites, wild fruits and greens. Then, it was our turn to share with Chido’s mushroom-growing trainees. Growing mushrooms, it turns out, is conceptually pretty similar to a lot of fermentation techniques, so our group who had never before tasted miso were a quick study on the process of making one out of round beans and red sorghum. Over two days we covered fermentation and cooking techniques they could use to transform the ingredients growing around them—heritage grains, wild fruits, mushrooms, even unexpectedly delicious weeds, into low-cost and delicious variants of what we’d learned from them earlier, that they could make for themselves, teach their neighbors, or sell to generate extra income. To facilitate this process further we’re helping design and develop the next part of Chido’s teaching system, a community kitchen for cooking, processing, and fermenting and a knowledge base for how to put it into practice.

Stay tuned for more updates on our work with Chido and a look into what’s brewing. 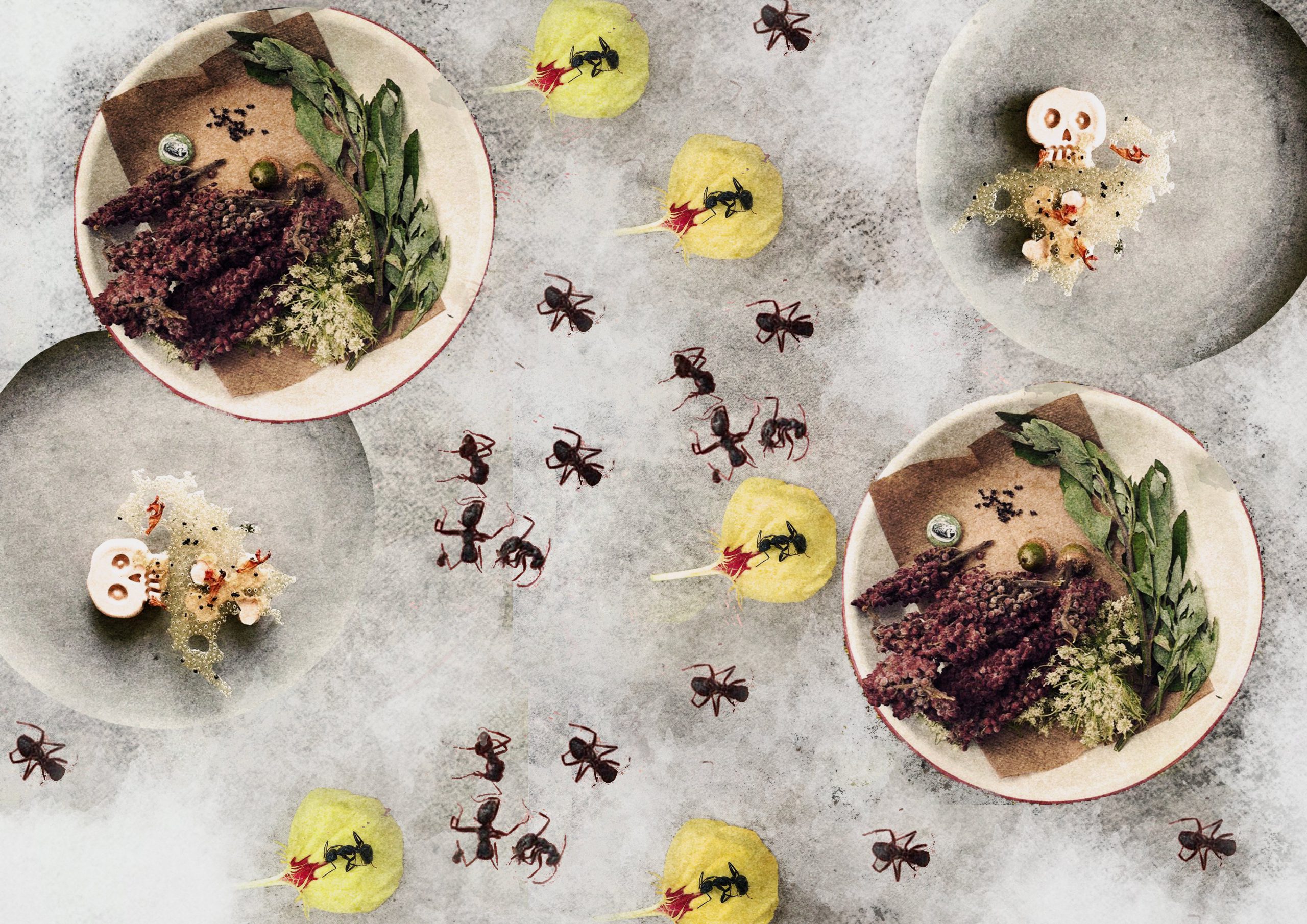 Raising Ants in the Midwest

Iliana Regan chronicles her dabble in raising carpenter ants fit for a plate. A beginner's guide to foraging – from what to find and when