When Chef Alain Senderens recalls the period when he suggested a particular glass of wine with every dish at Lucas Carton many years ago, he remembers that everyone was against it—including his wife.

“What year was this?” René Redzepi yells from the audience, where he sits among David Chang, Massimo Bottura, Frank Castronovo, and a slew of other who chefs who literally—and figuratively—sit at Senderen’s feet. It’s the first day of the MAD4 Symposium in Copenhagen, and this year, it centers around the question, “What is cooking?”

“Quelle année cherie, c’était?” Senderens then calls to his wife, leaning over the arm of his chair, waiting for her to give him of an approximate date. She answers: 1980, 1985 or so.

“Ah,” he says, slumping back into his chair. In the 1980s, Senderens was pairing wine with his dishes. He was the first to ever do this, he adds, as wine pairings had never before been written on a menu—yet alone verbally proposed. And when he went as far to pair a chèvre de Touraine with a dry Vouvray, which no one had done before, it was the “scandale à l’époque.” No one drank white wine with cheese.

Senderens then recalls one more thing about his wine pairing: That the majority of people ordered it.

At 75, Alain Senderens is no longer running a restaurant. Sitting on stage next to Christine Muhlke, the senior editor at Bon Appétit who’s translating Senderens from French to English, he isn’t at the symposium to demo one of his iconic dishes, such as Shizuo salmon or his legendary canard Apicius. He also isn’t wearing the white chef’s jacket that he wore on a daily basis. Instead, he sports black suit jacket, “without a tie,” he jokes. After spending nearly 50 years cooking in various kitchens around France, Senderens is at MAD4 as the iconic chef he is, but he’s there to just sit down and talk.

To hear him, a father of France’s nouvelle cuisine in the 1960s and 1970s, address the theme, “What is cooking?” is simply enough.

Born and raised in Hyères, a small town in Provence’s Var department, Senderens took an apprenticeship at Lourdes in the Ambassador Hotel and set off for Paris by the time he was 20. Upon arriving, he took a position at the legendary La Tour d’Argent as commis garde-manger, and later moved up to chef rotisseur. And then, he took off—chef saucier at Lucas Carton and Berkeley, chef poissonnier at Berkeley, sous chef at Hilton Orly, until in 1968, he decided to open his own restaurant. On rue de l’Exposition, just around the corner from the Eiffel Tower in Paris’ 7th arrondissement, l’Archestrate est née. Though Senderens moved the restaurant to a spot on rue de Varenne just years after opening in its original location, he managed to win 3 Michelin stars with the restaurant in just 10 years.

During this time, along with Paul Bocuse, Michel Guérard, and Troisgros, Senderens began to question the basics of French cuisine that he had been taught without question; after having been instructed to ‘do this to that because that’s how we’ve always done it in France’ in the kitchen, the group of chefs fought to rejuvenate what had been an unwavering cuisine. Shunning butter- and cream-laden dishes, heavy sauces, and longer cooking times, they breathed life into a cuisine that hadn’t changed in decades, lending them the title as fathers of Nouvelle cuisine. At l’Archestrate, Senderens cooked with produce according to season, used Oriental spices that had been shunned since the beginning of the 17th century, and served smaller, delicately plated dishes. These techniques aren’t revolutionary in today’s world—in fact, they’re commonly practiced—but for Bocuse, Guérard, Troisgrois, and Senderens, this shift in approach didn’t go unnoticed.

“[Senderen’s kitchen was] a place of incredible creativity,” says Alain Passard, who before becoming the Michelin-starred chef he is today, worked for Senderens. “We all liked to be around him like his kids. He made me face flavors that had never before played into my culinary repertoire, and I felt like I was being born at each instance. He destabilized me as to make me rediscover an anchoring in the pan.”

And though Passard says Senderens’ words were sometimes troublante, they were always juste—he says they gave him the confidence that made him the chef he is today.

After gaining recognition at l’Archestrate, Senderens decided it was time for another something new. Just as he had jumped around from place to place earlier in his career, only a few years after winning his third Michelin star in 1985, he left l’Archestrate—which went to Passard—and went back to Lucas Carton, the sanctuary of French haute gastronomy. But this time, he wasn’t there to comply with every rule of French gastronomy he had been taught.

Though Senderens is often lumped into the group of other young chefs who were revolutionizing France’s cuisine in the 1970s, what separates him from his colleagues was his attention to wine’s place on the table. To know how a specific wine works together with food, and to be able to articulate this symbiosis to the customer, is not a minor art—it’s l’art total.

During the mid-eighties, Senderens became serious about this relationship. He began meeting with Jacques Puisais, an influential oenologue at the time, who helped him understand the complexities of wine and whet his palate. Inspired, Senderens traveled to Dijon and Bordeaux, where he took dégustation classes to gain knowledge about wine the only way one truly can—experientially. And when he returned to Paris, more fascinated and knowledgeable than before, he applied what he had learned.

Though Senderens’ wife approximated that he had introduced his menu with wine pairings in 1980 or 1985, the exact date was 1987. Senderens had returned to Lucas Carton, where he found prices to be exponentially too high, and food to be somewhat uninspired, and he did what had never been done before: proposed a glass of wine with each plate.

As stated earlier, this decision caused a disturbance. Other chefs, his customers, and even his wife questioned him, as the idea was unheard of—especially in a country where tradition has trumped innovation for centuries. But for the three months that Senderens tried out the new menu, he says that nearly 80 percent of his customers ordered the food with the suggested wine pairing.

“The agreement of plates and wines for him was the final point a recipe could reach,” Passard says of Senderens’ fascination with pairings. And more than just hand a wine and dish that worked well together to a customer, Senderens wanted his customers to know about the wine. When Passard was working at l’Archestrate, Senderens sent him to the biggest vineyards around France to learn about wine, as well as to get to know the producers. “He always wanted to associate the name of the wine-maker with each of his plates.”

Through his career at Lucas Carton, Senderens continued to make brave moves, the most being in 2005. After running the kitchen for 28 years, he bought the restaurant and sent back his three Michelin stars, declaring he no longer had any desire to appeal to their standards by charging unreasonable prices or fixating on how the waiters folded the napkins. He wanted a “bistro de luxe,” where prices would be nearly cut in half and the food would be simpler.

And this time, the name of the restaurant wouldn’t be Lucas Carton—it was Alain Senderens.

At his newly named restaurant, Senderens would completely revamp what Lucas Carton had been. Waiters wouldn’t be somber servants to the customers; instead, they would be lively and more casually dressed. He would start to introduce dishes with soy sauce, as he had been inspired by Japan’s simple, aesthetic approach to food during a trip he took, and tempura would on the menu. There would be no tablecloths, and contemporary French designer Noé Duchaufour-Lawrance would come in to modernize the aesthetic with lighting behind wall panels and tables. The restaurant would still be situated on Place de la Madeleine, but that would be the only constant.

Duck Apicius and homard à la vanille were no longer on the menu, but instead Sendererns featured lighter, seasonal dishes with Asian sauces and lighter spices. The staff was smaller and more jovial with their customers, who left the restaurant paying 40 percent less than they would’ve had they dined there months before. And enforcing what he had always wanted, every dish had a wine pairing—including the name of the vigneron.

“A chef, no matter where he’s from—France, Japan, America—can take influences from everywhere, and build his own experience,” Senderens says. “To be the master of yourself, that’s a great philosophy. Choose your style, and that’s what’s great—that there’s so much diversity.” At Senderens, that style was simple and unpretentious, yet elegant.

Outside his immediate vicinity, his influence was also apparent. At the location that previously housed l’Archestrate, Passard was running his own restaurant, l’Arpège, where Senderens’ influence was coming out of his three Michelin-starred kitchen. His dishes would show restraint—a trait that he attributes to Senderens—and he would practice the other techniques that he learned when cooking for the chef he thinks of as an older brother.

With his presence alive at l’Arpège and restaurants of other chefs who worked for Senderens, the chef himself retired in late 2014, and the name of his restaurant changed back to Lucas Carton. And because he’s retired, he feels like he can finally come out and say that “gastronomy is the only complete art form,” even though it isn’t commonly considered to be on the same level as other art forms such as painting or sculpting. He may be retired, but he’s optimistic about this inequity slowly changing.

Though he isn’t completely retired. Todaay, he co-owns M.O.B., a hip hop-themed vegetarian restaurant in Brooklyn with Cyril Aouizerate, where the two serve “vegetarian food for carnivores”; in his older age, Senderens has learned to lighten up his diet, and he sees the future of food in vegetables. As for Aouizerate, a younger chef, he calls Senderens “a fucking rock star” in an interview with Grub Street.

Though Senderens had his fair share of criticism after returning his Michelin stars, he’s always had his advocates.

“I wouldn’t be the happy chef that I am today had it not been for l’Archestrate, for Senderens, and for his dear wife Eventhia,” Passard says. “So much love to those two.”

After speaking for nearly 45 minutes, René calls up on stage, asking Muhlke to tell Senderens that they had to wrap it up. The talk had to come to a close, and René wanted to end with a question. However, Senderens had to answer to question succinctly—just a “yes” or “no”—which was something he had proven to be incapable of for the entirety of his discussion.

“Do you think that gastronomy is looking healthy, prosperous and better,” René starts, before Senderens calls out “yes,” and before Christine translated the sentence. René slows down, trailing with the end of the sentence (“than when you started?”) and accepting Senderens’ response.

And then ignoring what he’s told to do—the decision Senderens made over and over during his career that made him the celebrated chef he is today—he begins to elaborate. 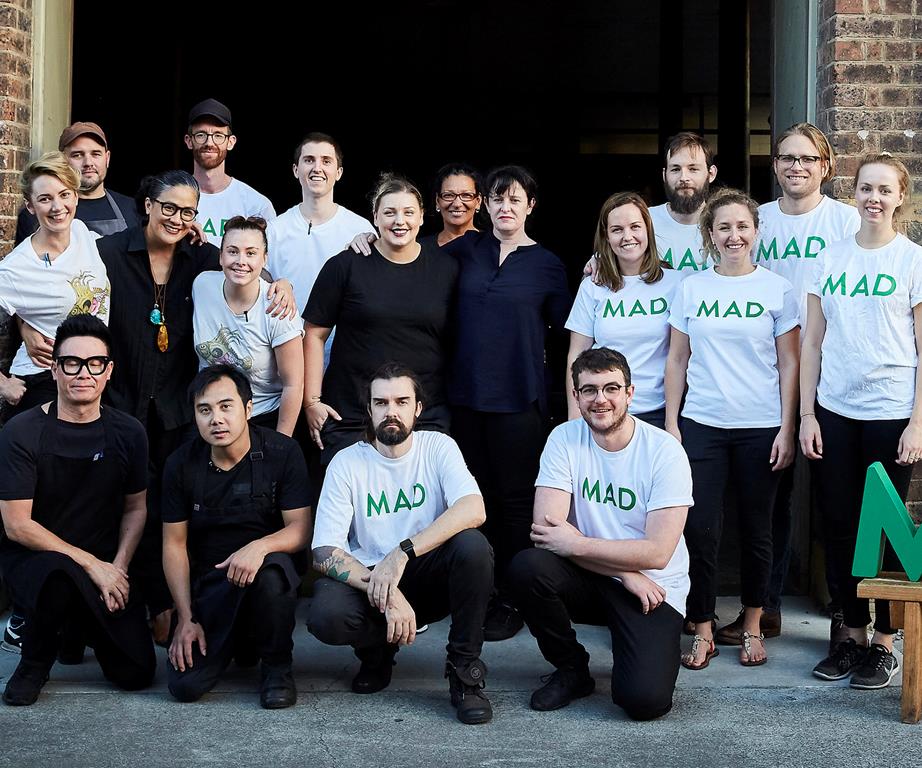 A spin-off of the MAD Symposium, MAD Monday events invite the public to join the discussion about some of the most important questions in food right now, starting with Australia’s Indigenous food systems. 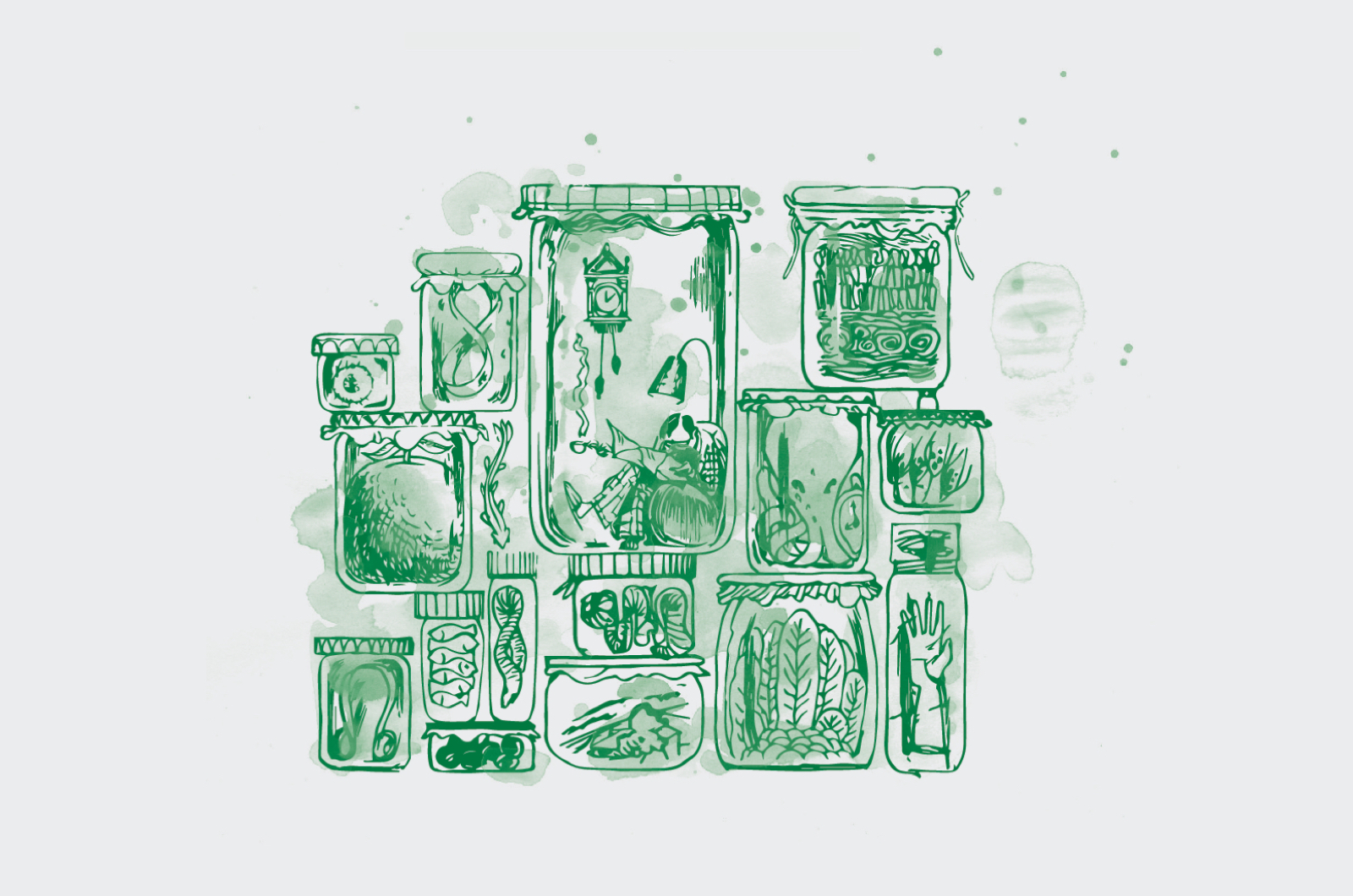 MAD's head of research thinks scientists and chefs need to get closer. 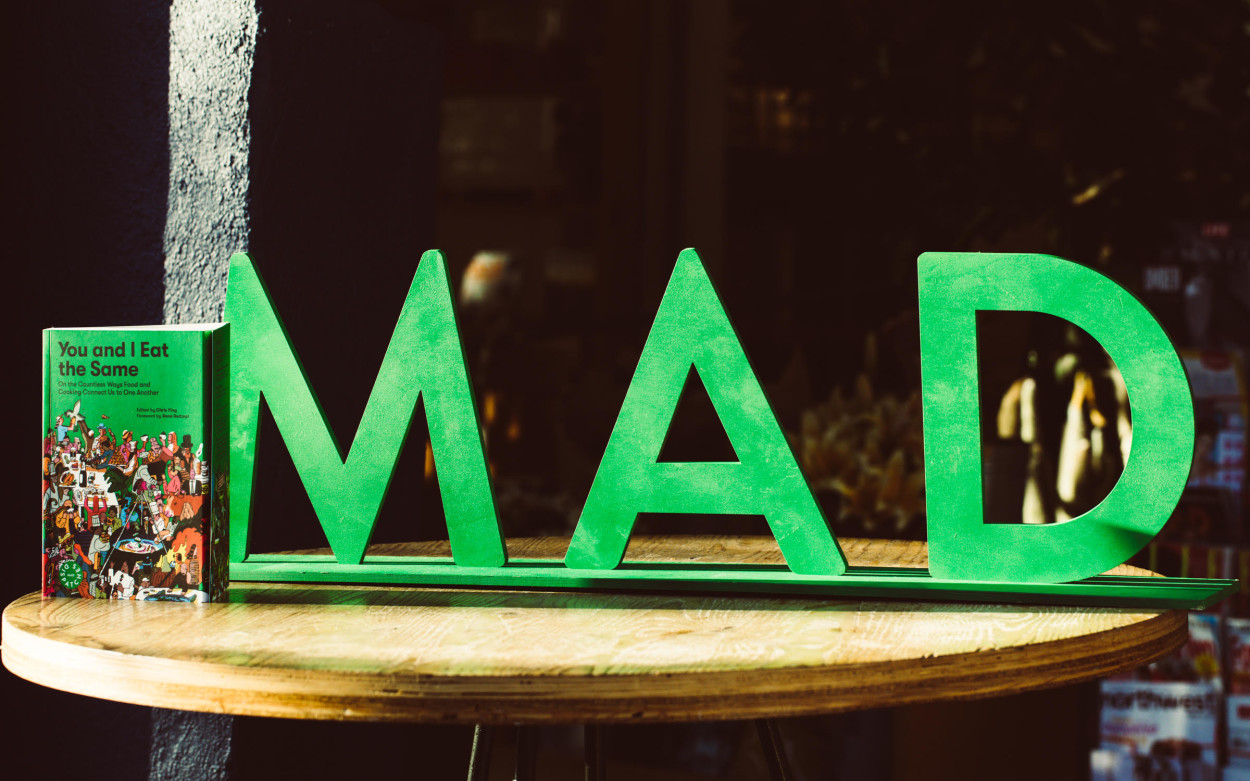 Meant to be Eaten

A conversation with Melina Shannon-DiPietro and Chris Ying on the first book of MAD's book series "Dispatches", devoted to inspiring, educating, and creating sustainable, lasting change in how the world eats.
This website uses cookies to improve your experience. We'll assume you're ok with this, but you can opt-out if you wish. Cookie settingsACCEPT
Privacy & Cookies Policy